NO SALES TAX on orders shipped to locations outside of Texas. That means you could save up to 10% in tax.

Aquarium Manual
What You Should Know About
Testing Water Quality 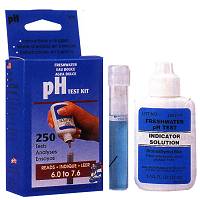 When a new aquarium hobbyist leaves a pet store with an aquarium and all the accessories to set it up, the one product likely to be missing is a water test kit. Few new hobbyists are even aware of them.

A typical test kit retails for between $5 and $25, which is not a lot of money when compared to the cost of other items in the aquarium hobby. Nonetheless, hobbyists who are willing to spend $200 or $300 on an aquarium often balk at spending $20 or $30 for a variety of test kits.

This is a false economy. In the long run, it is less expensive to purchase test kits than it is to buy medications for diseased fish and replacements for those fish that die.

Simply looking at an aquarium will not reveal how good the water quality is or isn't. Filter systems will remove visible particulate matter so the water appears clean, but it is the dissolved substances in the water that cause problems. Fish become physically stressed from the presence of these toxic substances. This stress depresses the immune system to the extent that it is no longer able to prevent disease-causing organisms from infecting the fish.

What most inexperienced hobbyists do not realize is that poor water quality is responsible for as much as 90 percent of all diseases in aquariums.

What most inexperienced hobbyists do not realize is that poor water quality is responsible for as much as 90 percent of all diseases in aquariums. Because looking at the water gives no indication as to what the levels of toxic substances might be, the only alternative is to use test kits to measure the amounts of these substances in the water.

There are different types of test kits to measure different aspects of water quality. Some kits are essential, while others are optional under most circumstances. The most important kits are those that check ammonia, nitrite and pH. Other kits are used to measure water hardness, nitrate and dissolved oxygen.

Hobbyists with saltwater tanks often use a test kit for copper, phosphate, and other dissolved substance. There are also more specialized kits that can check alkalinity, iron and carbon dioxide.

Ammonia is highly toxic to fish even in very small quantities. It is produced by the excretion of the fish into the water and by dead or decaying material (such as decayed food) or other organic materials. Ammonia is a significant danger to a newly set-up aquarium when a number of fish are added at the same time. The "load" of the tank causes a huge amount of fish excrement to be dumped into the tank at one time before a strong system to convert that ammonia has been established.

Ammonia can also be a problem if the tank is overcrowded. If the ammonia level is high enough, permanent gill damage is possible.

When a new aquarium is being conditioned, the ammonia level will rise rapidly during the first week or two and then subside relatively quickly as the beneficial bacteria becomes established and begins to "digest" or convert the ammonia to nitrite. Without a test kit, however, there is no way to monitor the ammonia cycle. Many new aquarists see high mortalities during this stage.

Nitrite, which is just as dangerous to fish as ammonia, must also be monitored. The ammonia in an aquarium is converted to nitrite by bacteria which often take several weeks to reach a beneficial concentration in a new tank. During the break-in period for the tank, as the ammonia level drops, there is a rapid rise in nitrite that takes weeks to subside. This is known as a nitrite spike.

When fish become sick, checking the water will often reveal an elevated nitrite level. In established tanks, a sudden rise in nitrite can occur from the addition of new fish, overfeeding or other factors. (first an ammonia spike then a nitrite spike) A test kit should be used on a regular basis to monitor nitrite levels.

Nitrite is converted to nitrate, a relatively safe compound, by another type of bacteria.

Nitrates are a type of fertilizer used by aquarium plants and algae. They are the third stage of aquarium maturity: ammonia to nitrite to nitrate. In general, nitrates in the freshwater tank are harmless to fish, so it is not necessary to buy a nitrate test kit. Studies have shown that nitrate levels in excess of 400 parts per million have no adverse effect on most fish.

If your tank is heavily decorated with live plants, nitrates are beneficial. However, if you do not have live plants, too much nitrate concentration can contribute to an undesireable algae problem.

The situation is somewhat different in saltwater aquariums, particularly if there are invertebrates in the tank. The health of many invertebrates will deteriorate if the nitrate level exceeds 20 parts per million. Therefore, marine aquarists should purchase and use a nitrate test kit.

When excess levels of ammonia, nitrite or nitrate are detected in the water, the most effective solution is to replace up to 30 percent of the aquarium water immediately. The next step is to try to determine the source of the compound in question.

In a new freshwater tank, ammonia/nitrite is to be expected. There are now bacteria-enhancing products which can be used to "seed" a new tank and start the bacterial growth with a bang.

In an seasoned freshwater aquarium with a properly maintained biological filter, such as an under-gravel or tank-mounted filter, a high nitrite reading should be considered a danger sign. Overcrowding and overfeeding are common causes for increased nitrite levels. Anything which quickly overloads the system or any condition which destroys the bacteria is dangerous.

Back-mounted filters usually contain two inserts: one for large praticulates and one for biological filtration (the bacteria grows on this insert). If you leave the large particulate insert in the filter for too long, bacteria will begin to grow on that cartridge and the tank will come to depend on that bacteria to remain free of ammonia and nitrite. If you then strip the bacteria out of the tank by changing that filter cartridge, an ammonia/nitrite spike may result. The lesson? Change the filter inserts more often and change only one cartridge at a time.

pH is the acidity or baseness of the water. A pH test kit is vital to maintaining the long-term health of the fish. Most fish have a preferred range of pH values. The pH scale runs from 1 to 14, with 7 being neutral, 1 being maximum acidity and 14 being maximum alkalinity. The scale is logarithmic, meaning that a 1-point change represents a difference of 10. Thus, if the pH changes from 8 to 7, the water is now 10 times more acidic.

Over time, the water in aquariums tends to become more acidic. Usually, frequent partial water changes will maintain the pH of the freshwater aquarium. Occasional addition of buffering compounds may be necessary. (In a freshwater tank, placing pieces of coral in the tank will cause the water to become more alkaline, which is usually not a desirable change.)

The bacteria in biological filters use large amounts of oxygen. These life processes and other general biological activity will continually lower the pH of the water.

In marine tanks, artificial salt mixes contain buffering agents to counteract this tendency toward acidity, but the quality of the salt mix is very important. Poor quality mixes may not have enough buffering or mineral content to maintain the required pH. In all cases, mineral and trace element supplementation is also necessary.

Without frequent measurement of the pH, however, there is no way of knowing if the buffers are keeping the pH up. The pH should not drop below 8.0 in a marine tank or below about 6.0 in a freshwater environment or you will risk the health of the beneficial bacteria as well as the fish. Although most fish will adapt to local tap water conditions, they may not show their best colors and often will not breed if the pH differs considerably from their waters of origin.

The use of airstones and other aeration techniques can make a substantial difference in the levels of dissolved oxygen in an aquarium. This is particularly important during hot weather. The higher the temperature of the water, the less dissolved oxygen it can hold.

Airstones increase oxygen. However, it is the agitation of the surface of the water which is most beneficial. Powerheads which can skim the surface are beneficial. In marine tanks skimmers or filters which allow the water to trickle through air space are also helpful.

Test kits are available with either liquid or dry reagents. The liquid kits are usually less expensive, but have a shorter shelf life and may not be as accurate. All test kits will become less accurate over time. High-quality kits will include an expiration date to indicate when the kit should be replaced.

Reach us Mon - Fri, 9:00am to 4:30pm CT. Or send us an email
Some images are the contribution and courtesy of FreePik and Vecteezy

©: Copyright 1996- by FuturePet.com. All Rights Reserved